UK charity Sense about Science has recruited 20 members of the public, including Somerset Beekeepers’ Association chairman Anne Pike, to join the national Ask for Evidence programme. Ambassadors will help ensure evidence is at the heart of discussions about issues that matter to their communities. 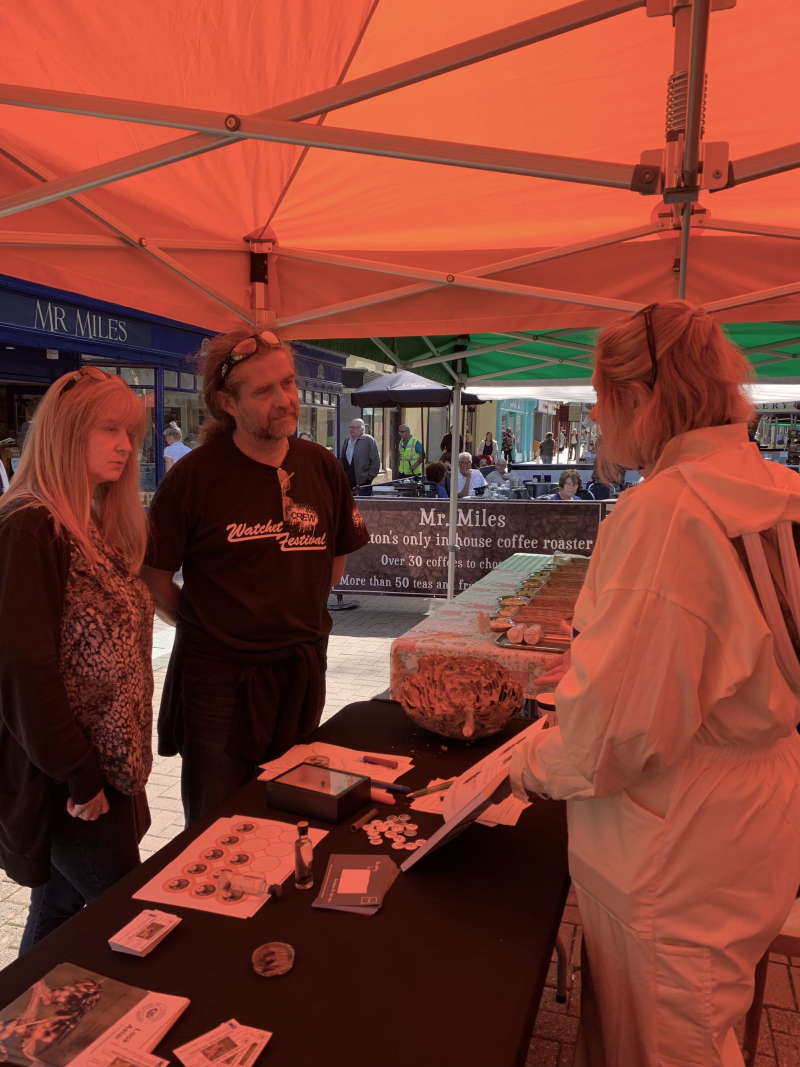 We hear daily claims about all manner of topics, from ‘wonder’ diets, to new energy technology, to the dangers of social media. But how do we know these claims are true?

Sense about Science has recruited 20 Evidence ambassadors from across the UK, and different walks of life, from a retired ship’s captain in Aberdeen to a bee keeper in Somerset. Local resident Anne Pike, Chairman of Somerset Beekeepers’ Association from North Curry, Taunton is one of these 20 and will be championing evidence in decision making in the community. They are particularly passionate about protecting honeybees and other pollinators from the combined threats of lack of forage, pesticides, disease and predators.

The Evidence Ambassadors have been recruited as part of the national Ask for Evidence programme initiated by Sense about Science. The programme inspires the public to hold powerful figures, companies, organisations and public bodies to account.

Ask for Evidence Ambassadors encourage others to look for the truth behind claims, by giving talks, running activities and talking with community groups in their region about issues that matter to them. Previous talks and activities given by Evidence Ambassadors have been given to groups including Women’s Institute branches, allotment associations, parent - toddler groups and scout troops.

The first 10 ambassadors reached over 50,000 people and the programme has seen more than 1500 people ‘ask for evidence’, by investigating claims and sharing the results on the ask for evidence website. Thanks to funding from the Wellcome Trust, Sense about Science built on this success in 2019 by recruiting 20 more ambassadors from across the country, and all walks of life, who want to highlight why evidence matters to them.

Successful applicants received expert training in public speaking, insights into campaigning and communication and public engagement. Anne Pike is now looking for opportunities to organise and deliver talks in Somerset and the South West of England.

Anne Pike said: “Currently I am the Chairman of Somerset Beekeepers’ Association and we are campaigning hard to protect our environment from Asian hornets (Vespa velutina nigrithorax). Our aim is to enable beekeepers and the public to recognise this highly destructive non-native insect by cascading the information through the media, events and by working with county-based organic dairy Yeo Valley. We are working with Exeter University, beekeepers in Jersey (where the hornet is established) and others to back-up our public campaign for ‘recognition and reporting’.

“There are widely held concerns in the beekeeping community that the government will withdraw funding for the continued control of Asian hornets once they become established; this would threaten all UK insects. Challenging any reversal of policy through the media (traditional and social), talking at events such as the Royal Bath & West Show and Taunton Flower Show, raises the issue with the public and encourage others to hold the government to account.

“The plight of the honeybee opens up a raft of environmental issues from climate change to pollution and farming practices. By focusing on the small (a bee is just 15mm long!), I believe it is possible to stimulate discussion and debate about these important aspects of the health of our nation.”

Alex Clegg, Campaigns and Communications Coordinator at Sense about Science, said: “Do you care about evidence and want to hold the powerful to account? Whether it’s claims about windfarms, healthcare, or road speed limits and everything in between, we want to ensure that evidence is at the heart of the discussions that matters most in your community.”

About Ask for Evidence
Ask for Evidence is a public programme, ran by the charity Sense about Science, that helps people request for themselves the evidence behind news stories, marketing claims and policies.
How can we make companies, politicians, commentators and official bodies accountable for the claims they make? If they want us to vote for them, believe them or buy their products, then we should Ask for Evidence.
Ask for Evidence is about holding powerful figures to account and not having the wool pulled over our eyes on important issues. It is making sure that a discussion of the evidence is happening when it really matters. That might be when a public figure or authority makes a claim or decision on our behalf; or when public money or our health or safety is at stake.
Ask for Evidence is supported by hundreds of public figures, organisations and thousands of supporters such as Mumsnet, NHS Behind the Headlines and the Royal Statistical Society. The programme is funded by Wellcome.
Ask for Evidence was launched by Sense about Science in 2011. Sense about Science is a charity that helps people to make sense of science and evidence and promote the use of evidence in public life. Visit www.askforevidence.org
About Sense about Science
Sense about Science is an independent campaigning charity that challenges the misrepresentation of science and evidence in public life. We advocate openness and honesty about research findings, and work to ensure the public interest in sound science and evidence is recognised in public discussion and policy making.
About Wellcome
Wellcome exists to improve health by helping great ideas to thrive. We support researchers, we take on big health challenges, we campaign for better science, and we help everyone get involved with science and health research. We are a politically and financially independent foundation.