Launching and editing new business-to-business magazine Toco is a joy! It involves fun and creativity - writing celebrity interviews, working with talented designers and talking to Devon's business community. In the inaugural issue I interview one of the giants of the Exeter Chief's rugby union team. 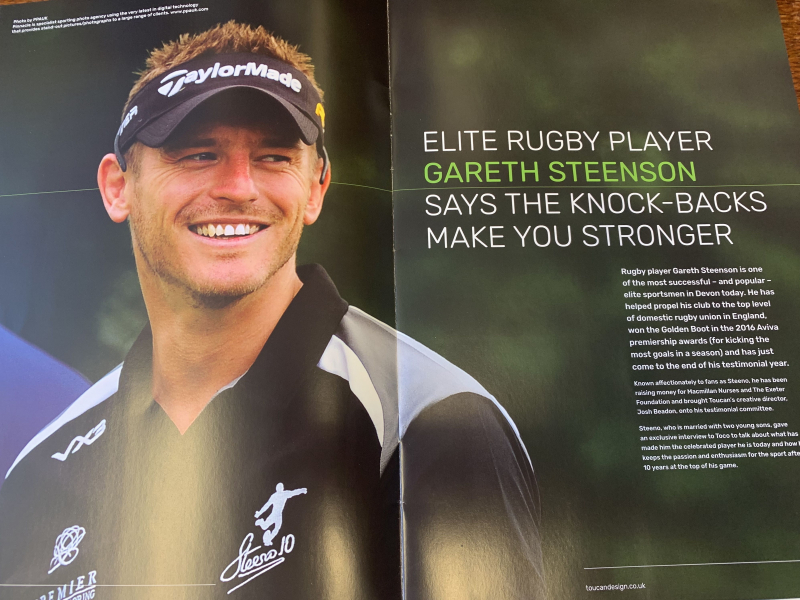 “It is doubtful, if they are to mark the true influence of the man, that there is a stadium big enough [to hold his testimonial match].” Stephen Jones, Rugby Correspondent of The Times

Rugby player Gareth Steenson is one of the most successful – and popular – elite sportsmen in Devon today. He has helped propel his club to the top level of domestic rugby union in England, won the Golden Boot in the 2016 Aviva premiership awards (for kicking the most goals in a season) and has just come to the end of his testimonial year.

Known affectionately to fans as Steeno, he has been raising money for Macmillan Nurses and The Exeter Foundation and brought Toucan’s creative director, Josh Beadon, onto his testimonial committee.
Steeno, who is married with two young sons, gave an exclusive interview to Toco to talk about what has made him the celebrated player he is today and how he keeps the passion and enthusiasm for the sport after 10 years at the top of his game.

“When I was growing up I was just really interested in doing sport and my parents let me try all sorts. I kind of always had it and I didn’t like losing. I remember crying at my own birthday party when I was six or seven years of age because we didn’t win – I’ve always had that sort of drive in me,” said the 34-year-old fly half.

“I had plenty of good knock-backs back in Northern Ireland; I played in two world cups at under age level [Ireland U21s and U19s] and captained the team for a year and then was told I wasn’t good enough by Ulster. But I had that sort of believe in myself that I was good enough no matter what anybody told me; I wanted to succeed and knew if I didn’t explore every avenue, I’d regret it.”
He arrived at the Devon club from the Cornish Pirates 10 years ago and his attitude has been influential in getting them into, and keeping them in, the Premiership and has contributed to the ethos of a team which both values the players which got them there, yet is uncompromising in its pursuit of success. Despite a career spanning 265 appearances, 14 tries and 2,385 scoring points, he still has a hunger and desire to excel.

“Especially now that we have established ourselves as a club you get a taste for success and kind of want to get more and more. I’m very aware that I have a couple more years and I want to try and maximise my playing career. It’s got to be nice to look back on my career and say we won this, this and this. Obviously the drive is hugely there.”

He attributes mental strength, determination and resilience as accounting for “that extra five per cent needed to create a professional player” and says parallels can be drawn with commerce.

“I’ve been told my entire career I wasn’t good enough and in business I suppose it is exactly the same; you’re told you’re not good enough in this field so, what do you do, you try to move on to something else – the two of them go hand in hand but it’s just in sport it’s more public.”

Each season a handful of rugby players are honoured with a testimonial year in recognition of long and outstanding service to the game and their club; in 2017/2018 the honour went to Steeno and he says it was a “real eye-opener!”

“It’s a very humbling experience because of the amount of people who have come out and supported it like Josh and finding out what it takes in business terms to run a match or a gala dinner – it’s not just a question of showing up and doing it!

“Going in [to the studio in Southernhay] and helping to design a logo, for instance, was good fun. I really enjoyed sitting down and getting my teeth into it and being asked to go and do things I’d never have been comfortable doing two, three years ago.”

Steeno has a degree in business, which he achieved at the same time as playing the professional game, and says that so many of the lessons learnt on the sports field can be translated into the commercial world.

“There has to be a sort of drive – again, you’re talking about that extra five per cent to get to the top of what you want to do and you have to be very disciplined. It’s great that I have been fortunate to see those things, especially in the last year, and hopefully keep going forward with it.”

At present Steeno’s future is firmly anchored in the club after signing a two-year contract which takes him until the end of the 2019-20 season. And with his sons starting school in September, and the family’s love of the area, he is likely to be a Devon star for years to come.