Somerset Beekeepers’ Association (SBKA) is giving all its 900 members Asian hornet monitoring traps in readiness for the arrival of the non-native insects which threaten honeybees and other pollinators. 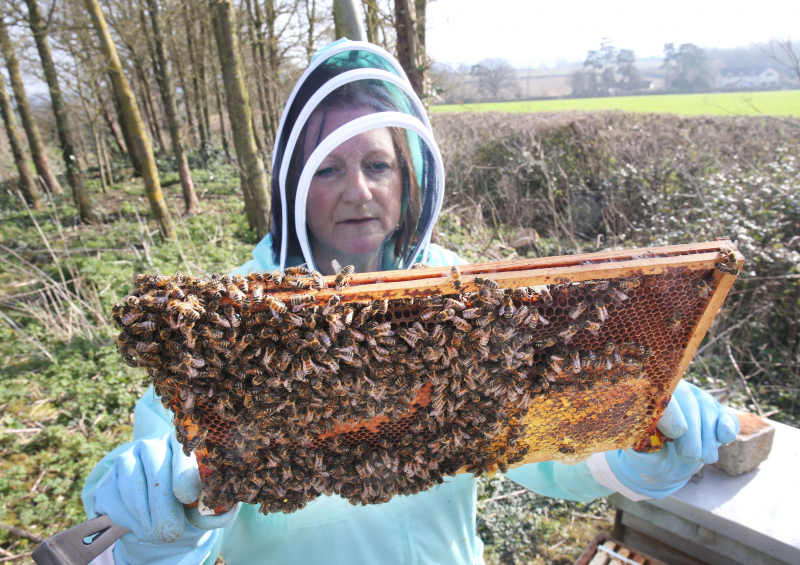 Distribution started at SBKA’s annual lecture day on Saturday (February 16) with members picking up traps to set up in their gardens. Beekeepers are advised to monitor daily and release native insects.

Anne Pike, chairman of SBKA, said: “We consider the arrival of Asian hornets to be so serious that we are spending thousands of pounds to make beekeepers and the public aware of these highly destructive and potentially devastating hornets.

“We are one of just a few county associations to provide monitoring traps for our membership. Vigilance is a cornerstone of our defence strategy and we want to mobilise the county to be on guard.”

Concerns about the potential for Asian hornets to appear in Somerset come after two nests were found and destroyed last year in Fowey, Cornwall, and two in Hampshire. An over-wintering queen, that can found a huge nest of hornets, was spotted in Jersey this month.

In parts of France, Spain and Portugal, Asian hornets have stripped the environment bare of honeybees and insects.

“If they get a hold here, they could be as devastating to pollinators as foot and mouth disease was to livestock,” added Anne Pike.

SBKA has set up an Asian hornet action team to respond to sightings and support the National Bee Unit to find nests.

The co-ordinator is Master Beekeeper Lynne Ingram: “As Spring approaches we need to start monitoring for the presence of Asian hornets, as mated queens will be on the wing from now onwards.

“We don’t know if there are any Asian hornet queens overwintering in the UK this year, or whether any mated queens will make their way into the UK post-hibernation, but we need to be prepared.

“When the queens start to come out of hibernation they search for nectar rich flowers in order to build up their energy. In France and Jersey they are often seen on early single Camellia flowers, so if you have any, it is worth keeping an eye out.”

The difficulty of destroying Asian hornets has been highlighted by Jersey’s experience. The first Asian hornet was spotted on the island in 2016 and despite the efforts of local beekeepers and volunteers from the South West, last summer there were more than 50 nests.

SBKA’s efforts to save honeybees and other pollinators are being supported by organic dairy Yeo Valley which donated £3,600 to the campaign and has pledged to raise awareness among their customers and staff.

The association has printed thousands of fliers and identification cards to help beekeepers and the public to recognise the insect.

Asian hornets look like large black wasps with an orange head. Any sightings should be reported immediately, preferably with a photo, to the Non-Native Species Secretariat (NNSS): [email protected]

SBKA:
Somerset Beekeepers’ Association is a Registered Charity run by volunteers and works to advance the craft of apiculture within its membership and to promote general awareness and understanding of honeybees.
https://www.somersetbeekeepers.org.uk/

A single Asian hornet can kill 50 bees a day, with a nest containing up to 6,000 workers and up to 350 queens.
In Jersey, France and large areas of Western Europe they are stripping the environment bare of insects before moving on to prey on managed honeybee colonies.